Black Hole and Interpretation of Potential

As above, the potential energy of universal gravitation becomes negative. Graph this, it looks like the figure below. 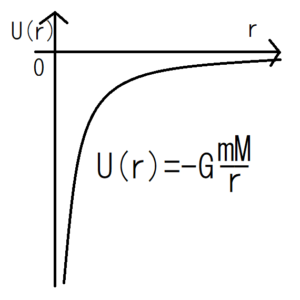 However, as we approach \(r=0\), the potential diverges to \(-\infty\). That means that if you get closer to \(r=0\), there will be places where the potential is too steep for the object to escape. Actually, this is the mechanism of a black hole. 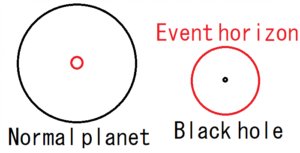 The black circles in the figure above represent the body of a planet, whereas the red circles represent the extent that even light will not be able to escape from inside of the circles. Normal objects such as the Earth and the Sun, like the left, the body itself contains a red circle. Therefore, you can escape from the Earth with a rocket or the like from its surface.

Exercise1 The strength of gravity

Assume that the person is on the surface of the Earth and assign it to the formula of universal gravitation.

We want to escape from the Earth using a rocket. When launching a rocket perpendicular to the ground surface, what is the minimum initial speed required?

Then, when we are on the ground surface, the kinetic energy is given as follows, assuming that the required initial velocity is \(v_0\) and the radius of the Earth is \(R\).

The escape speed is about 11 km per second. We can see that escape speed does not depend on mass of rocket because the rocket mass \(m\) disappears halfway.